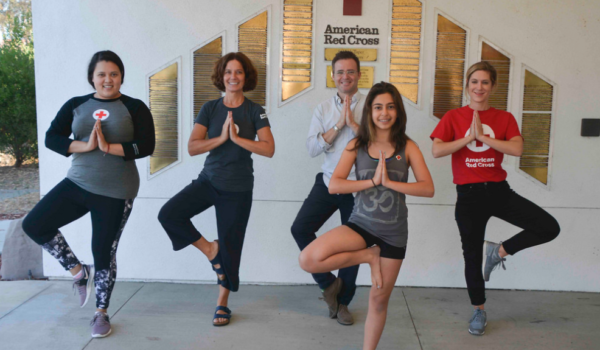 At the beginning of September 2017, when 12-year-old Certified Yoga Instructor, Natalie Asatryan, and her family were evacuated to escape the La Tuna Canyon Wildfire, they witnessed the work of the American Red Cross first hand, watching many neighbors seek refuge in Red Cross evacuation shelters to escape the deadly flames. Days later, they stumbled upon Red Cross Los Angeles Region volunteers in the Walmart Parking lot, in Burbank. The volunteers were there to help with Fox 11’s on-air donation drive to help raise funds to support Red Cross disaster relief efforts for Hurricane Harvey and the La Tuna Canyon Wildfire. When Natalie saw what the Red Cross volunteers were doing, she had her own idea on how she could help people affected by the disaster.